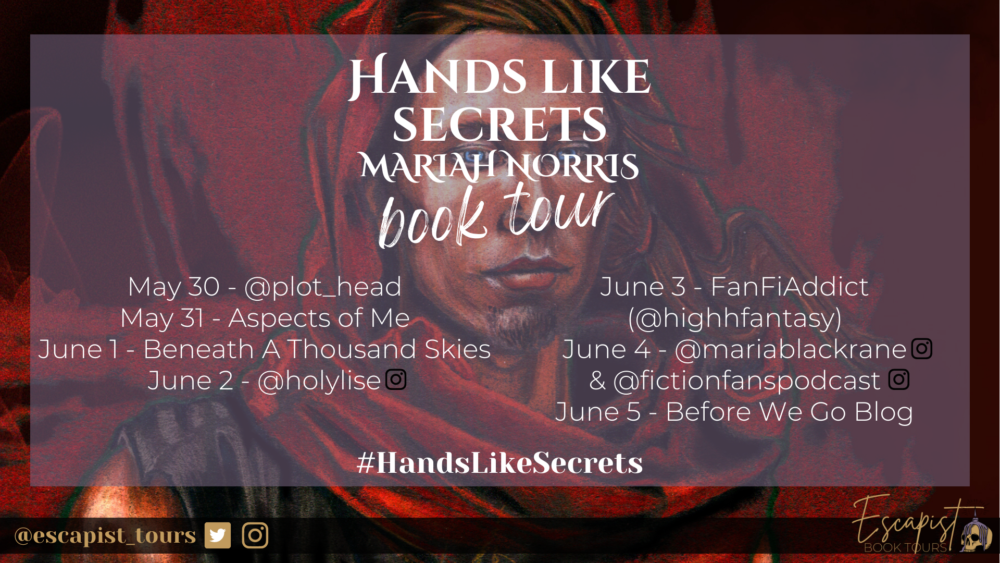 Welcome back to another stop for Escapist Tours! This time we’re celebrating Hands Like Secrets from Mariah Norris that was released earlier this month by Shadow Spark Publishing. I’ve had the pleasure interviewing Mariah for my stop on the tour where we talk about worldbuilding with diverse characters, designing festivals and the need for more cats in Fantasy!

Hands Like Secrets is the first instalment of The Seven Strands, a new adult epic fantasy series that follows a young autistic woman who joins an assassin on a hunt across worlds for a god-killing immortal. Along the way, she’ll have to come to terms with love, loss, betrayal, and the shifting nature of good and evil itself.

Rai (R): Hands Like Secrets is your debut, how does it feel having a novel out in the world?

Mariah (MN): Surreal…especially since this particular novel is the first I ever wrote from start to finish, twelve years ago. If I’m being honest, this wasn’t the one I thought would get published first, which is why I’m so glad that Shadow Spark saw this story’s potential and wanted to pick it up.

R: The cast of characters features some diversity – a non-binary character, a neurodiverse character, an asexual and a bisexual – how did you like writing these characters?

MN: Very much. Hands Like Secrets was one of several early stories I wrote and ended up going back to later, in order to take a good look at each character and ask myself, “Okay, but what if they were ____, how would that make their arc more satisfying?” It’s neat to add layers and see how they shift the decisions a character makes and how they move through their world.

I’m always a little nervous about getting the representation right, but I think as long as I do my research and hold these characters in my mind as people who are not entirely defined by any one thing, they will come across in a way that’s authentic.

R: In a world other than our own, how did you get around differences in language for describing these diverse characters and their identities? Was that a tough process?

MN: To me, it was a lot like any other worldbuilding. I had to place myself in the world and think the way these people thought…how would they describe, for example, someone who’s gay versus someone who’s straight? I ended up with these almost clinical descriptions: opposite-gender attracted, same-gender attracted, and then I reduced those to the acronyms OGA and SGA. The students at Aschamon already shortened “High Priestess” to “HP” in casual conversation, so it made sense that other acronyms would also be in use.

I had characters descriptively talk around specific terms like non-binary, asexual, and autistic, my reasoning being that if the world doesn’t have a word for it, then neither would they. I didn’t want to resort to making up a fantasy word for a real-world phenomenon and then have to use more words to explain what that word meant. Ideally, my job is to show what’s happening in the character’s head, and the reader will assign the appropriate word to it….or not. To me, the term is not as important as the lived experience of the character.

It was also helpful to consider how certain words (or lack of words) could be reflective of the cultures’ larger views, and how those views might coincide with or diverge from our society’s views. For example, I couldn’t think of a way to incorporate bisexual students into the Aschamon dorm setup…so I decided Mantle culture does not recognize bisexuality as a thing, and that this will likely cause problems down the road.

R: If you could design a festival line-up to fit the vibe of the book, who would be your headline acts?

MN: The Birthday Massacre and Within Temptation would have to co-headline. Evanescence, AFI, Red, and Breaking Benjamin would also be there. There would likely be wine vendors and a lot of lighters.

R: Finally, a little more whimsical, as a fellow cat lover, how much does speculative fiction need more cats?

MN: There can never be enough cats in SFF. They already exist halfway between worlds anyway, staring at stuff only they can see. If the world of Verre hadn’t evolved reptiles and birds as the primary niches instead of mammals, there would have been cats all over Aschera 🙂

Many thanks to Mariah for answering my questions and to Escapist Tours for facilitating the tour! Don’t forget to check out Escapist Tour’s Twitter and Instagram for a chance to win a copy of Hands Like Secrets!

This site uses Akismet to reduce spam. Learn how your comment data is processed.

Today we went to #potfestbythelake in Compton Vern

Expo haul: (Almost) Everything Just the Games The

#BookMail - you may notice a theme in my recent ac

Recently finished! In a bit of a horror mood at th

I am the Master Quilter! 🥳🐱🐈 Great fun p

#CurrentlyReading The Seep by Chana Porter. I am

A trip to Manchester meant a trip to @queerlituk w

Today for @escapist_tours you can find a guest pos

The little story that got me 2nd place in @uoblibs

Prizes! These are the books & t-shirt I won in the

Happy to say I'm joining the web reviewer team at

If you like what I do please support me via Ko-fi.